10 Tips for Using Social Media to Promote Your Business

Social media, as we all now know, is the place to share videos of cats doing funny things, complain to anyone who cares to listen about the government, the weather and public transport, and crush candy.

Which is all quite true, but there’s an awful lot of other stuff going on there as well, and any modern business worth its salt needs to be aware it also represents a unique opportunity to reach out and engage with customers old and new. In the same way that traditional advertising was placed where it had the best chance of being seen by those likely to be interested – local newspapers, niche and trade magazines and so on – so placing your business in the social media mix can raise your profile in an arena where ordinary people (your customers) are spending increasing amounts of their time.

People are deciding where to spend their money in very different ways these days, and if you want to be a business that benefits, you need to stay in touch with the latest trends in consumer behaviour. So, here’s our guide to some of the essential dos and don’ts of social media marketing.

1 If you’re going to do it, do it properly
Like providing ‘great content’, if you’re not using social media as a key part of your online marketing strategy in 2013, then quite frankly you may as well pack up your business and go and do something else instead; or so some people would have you believe.

Of course, social media can boost your traffic and the evidence is building that when it’s done well, it can have a significantly positive effect. Some commentators even believe it could soon outstrip search engines as a source of visitors for many sites, with those in the 18-32 age bracket especially turning towards Facebook and Twitter as their preferred means of finding a particular website.

But if you’re not careful, or organised and smart, about how you approach it, you can not only end up wasting a lot of time, you might even alienate those very people you were hoping to woo.

So: don’t set up social media sites, advertise them on your main website and then do nothing with them; don’t just use them as a means to plug your wares – people are far more savvy in this environment and will soon get bored and go away if that’s all you have to offer; and don’t – ever – forget that every post is representative of you, your business and your brand. One thoughtless tweet or comment placed in the heat of the moment or after a glass or two of wine on an empty stomach can cause major headaches.

2 Know your audience
Before you start reaching out, you really need to know who it is you’re reaching out to, when they’re most likely to be around to listen to you and how they’re using their social media accounts. In other words, you need to target your audience. 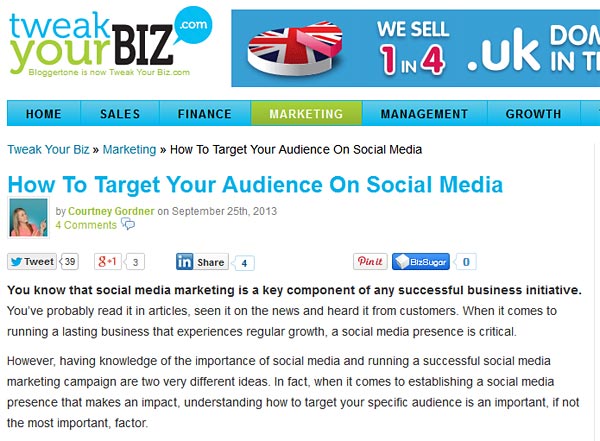 It’s like any good marketing campaign; if you want your efforts to have the best chance of being successful, you have to do your research first.

3 Don’t spread yourself too thin
Talk to different social media marketing ‘experts’ and you’ll pretty soon be convinced that you should be on each and every platform out there, and trust me, there are a lot of them.

As we’ve already stated, if you’re going to do this, you need to do it properly and if you try to take on too much too soon, you won’t get any of it right. The best way to start is slowly, so you can a) build up your confidence and b) focus. 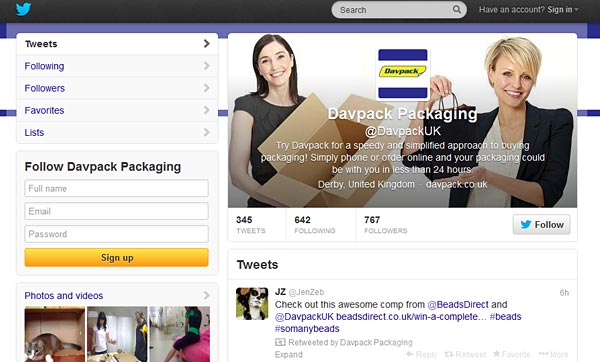 In most cases, the best places to start are Facebook and Twitter, as they are currently the ones with the most users, but Google+, Pinterest and possibly LinkedIn shouldn’t be far behind. Of course, some sites will be more suited to your business than others, so if you’re selling fashion, jewellery or craft items, don’t miss out on Pinterest; if your product is something more ‘manly’ (their word, not mine!), then take a look at Gentlemint. 4 Engage!
Exactly what the term ‘social media’ means is now a matter of some debate, but to my mind, the key to the whole thing is in the title; it is, after all, social media.

As we’ve already pointed out, using your social media just to sell your product can be a real turn-off. People want to talk, to communicate and to share and if you can tap into that, you will find an appreciative and even loyal following.

5 Find the right balance between too much and too little
Your tweet or Facebook post can be there one minute and gone the next, lost among the cats playing with cardboard boxes videos (yes, we do post them occasionally!) and Candy Crush Saga scores. Only communicate once a day, and half your audience may never see what you have to say or share. On the other hand, tweet out every five minutes and, unless you’re the funniest and most creative marketer on the planet, you run a very real risk of being too intrusive, too demanding – at which point, people may well stop the flow by cutting off the supply.

There is, unfortunately, no magic number I can give you that represents the ideal number of times you should tweet or post in a day. It will depend on the nature of your business, what you have to say, and the way your target audience uses their own social media accounts.

A little research should help – check out what companies with a similar target audience to your own are doing. Obviously, you want to check out those who appear to be using their accounts successfully – ones with large numbers of likers and followers, ones with plenty of retweets and shares, etc. (And, while you’re there, take a look at what they’re saying as well – which messages proved most popular; then, without actually stealing their ideas, consider how you can apply them to your own situation.)

6 Exclusive deals, offers and discounts
No matter how wise, witty and wonderful your tweets and how engaging your Facebook posts, sometimes you feel you’re shouting in an empty room. There are perfectly valid ways of building an audience a bit more quickly, and one is to offer exclusive deals and discounts. After all, we do all love a bargain and people are far more likely to keep an eye on what you’re doing on social media if they think there might be something in it for them.

Just make sure it’s not all you do!

7 Patience!
Rome, as the old saying goes, wasn’t built in a day. You won’t launch your social media strategy one day and have thousands of people signing up the next. Unless you’re launching the official One Direction Facebook page or the Justin Bieber Twitter account, of course.

For most of us, it’s a case of building up bit by bit, with lots of trial and error. The best advice I can give is that you should learn from your mistakes (and those of others!), learn even more when you get it right, monitor what social-savvy companies with a similar audience are doing and have lots of patience.

8 Facebook: run a competition!
Running a Facebook competition is a great way of boosting numbers, whether that means people liking and sharing your post promoting it, or liking your page as a whole. Both have significant benefit. If you’re not sure how to go about it, just put the term ‘Facebook competitions’ into Google and you’ll get a number of guides that will help you get started.

If you’re not sure what kind of competition to run, this post on Jeff Bullas’ blog has 30 ideas, from which any business should be able to find at least one to successfully adapt to their own situation. 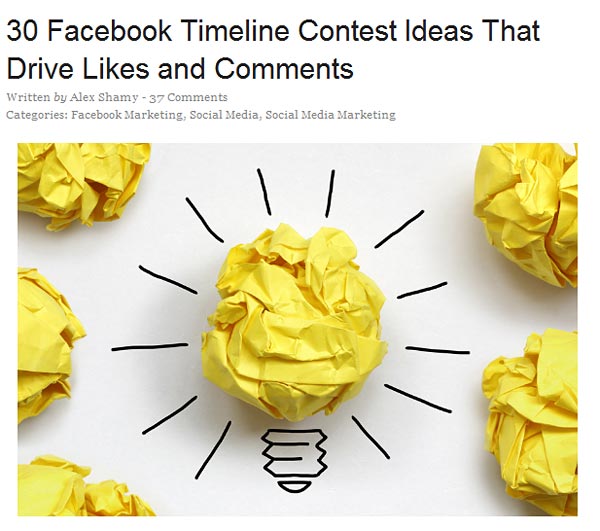 And if you have any doubt that this kind of competition can pull in new fans and followers, we’re in the middle of running a competition at the moment, which has increased the number of people who like us on Facebook and follow us on Twitter by several hundred!

9 Twitter: check out your competitors’ followers
One of the (many) great things about Twitter is that you can usually see who’s following who. That includes people who are following your competitors. So why not spend an occasional ten minutes flicking through the list and following those who look like they might be your competitor’s customers?

At the very worst they’ll ignore you or not even notice you, but it will only be a second or two of your time wasted. At the best, you might just bring your business to the attention of someone who’s clearly interested in what you have to offer.

10 Google+ authorship
We’ve talked elsewhere about the importance of blogging to help establish you and your business as experts in your field. If you search on Google often, you’ve probably noticed that when you get blogs among the results (and if you’re searching for information rather than a product, you should be noticing this more and more often), you sometimes get a little photo of the bloggers themselves.

This is happening because these bloggers have linked to their Google+ account through the authorship markup and the rel=author tag.

This has benefits in two ways. Firstly, while Google have never formally acknowledged this, it is now generally believed that Google results positively rank those using the Google+ account in this way – which, when you think about it for a few seconds, makes sense.

Meanwhile, having that picture there makes that ‘snippet’ instantly more visible, and also seems to establish a level of trust and credibility. Of course, we don’t know for sure that the picture is really of the person who wrote the blog, but that doesn’t seem to matter because, according to Kissmetrics, it still leads to a 150% increase in the number of clicks. If you’re not promoting your business on social media, what’s holding you back? And if you are, how have you managed to utilise it best? What are your successes and failures? We’d love to hear your stories and experiences, so please do share by commenting below!

Rebecca Price Box E-Marketing, Retail & E-Commerce No Comments »
« Top 25 Marketing Blogs to Read in 2013
5 Ways to Help Your Business Cut Through the Noise »